The one thing I can forgive non-writers for not understanding about the writing process is publishing, because it’s something I often see writers misunderstanding too.

But what most writers do understand is that publishing is just as hard as getting the book written, whereas I often hear non-writers assuming that I, as a writer, will get my book snatched up as soon as it’s finished, and it’ll be a bestseller in no time.

If only that really was how it worked.

So Part Four of my The Writing Process: A Guide For Non-Writers series is going to be on publishing. If you’ve missed any previous installments, you can find Part One (Preparation) here; Part Two (Writing The First Draft) here; and Part Three (Editing) here.

END_OF_DOCUMENT_TOKEN_TO_BE_REPLACED

So by now we’ve gotten to the point in the writing process where you’ve written a book. Congratulations! But your work is far from done.
I feel like people with no writing experience see this as the end point. You’ve written a first draft, therefore you’ve written a book, right? What people forget is that things hardly ever turn out right first time. If you read Part Two of my writing process series (discussing the writing of the first draft), you’ll understand the extent of this and the reasoning behind it. Even if you outlined your book in great detail, there is no guarantee that you won’t change things halfway through, or that you will be happy with the book that your outline produced. And of course, it’s extremely unlikely that you’ll be happy with the actual writing. Every writer has their flaws: some of us ‘underwrite’, some of us ‘overwrite’, and we all have words and phrases that we use far too often. The first draft is just a foundation for all the good things to come later, and it may need fixing before you can even do that.
So once you’ve finished your first draft, it’s time to edit. 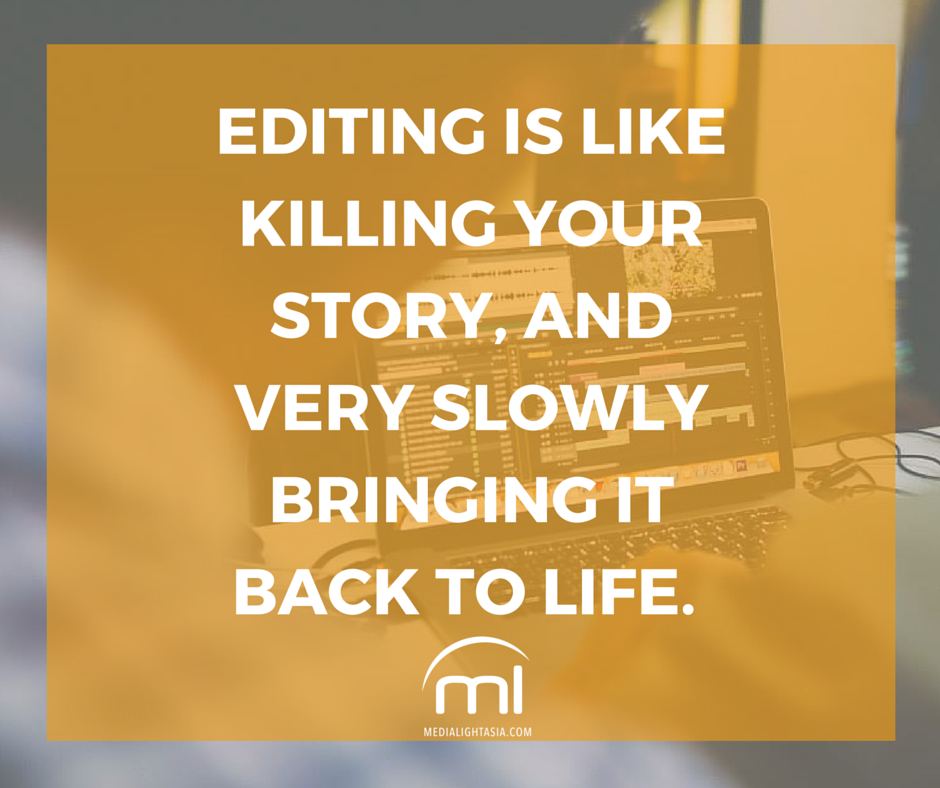 In my last blog post, I talked about preparing to write a book, which is the first part of the writing process. You can find it here. Today, I’ll be continuing with the next stage of the writing process: writing the first draft. This, I’m sure, is the bit non-writers think of when we say we’re writing a book. The bit where we sit down at our desks with huge smiles on our faces and a coffee by our side, and just let the words pour out of us. We’re excited about this idea and this story, and everything from the overarching plot down to every last comma is perfectly aligned in our heads. Now we just need to write it all down, then it’ll be ready for the world to read and love!
Sounds too good to be true, right? That’s because it is. Although writing the first draft may be the least complicated part – the only step to it is “sit your butt down and WRITE DAMMIT” – that does not mean it is easy. A writer faces many challenges while writing the first draft. Many writers quit at this point.

END_OF_DOCUMENT_TOKEN_TO_BE_REPLACED

I recently came across the image below, detailing things that writers hate hearing people say to them. It reminded me of some other things that I’ve known people say to writers – things like “Hurry up writing!”, which naturally goes hand-in-hand with point three, and “Can I read your book?” as if it isn’t a very personal thing that I haven’t even shown to my closest friends and family yet (I wrote a full blog post about that a while ago).

It occurred to me that the reason people say things like this is because they have misconceptions about what writing a book actually involves. So rather than just reminding people that writers find being told these things incredibly annoying, I thought I’d write a bit about what novel writers actually do. Hopefully this should help people understand that writing a book is ridiculously time-consuming and difficult, and even more so to do it well. Then you can go forth into the world safe in the knowledge that you’re not going to offend your writer friends, and can actively support them!

It might also be helpful for anyone number 4 applies to – if you want to write a book, maybe you should know what you’ll be getting yourself in for first!

We can split the book-writing process into three basic parts: preparation; writing the first draft; and editing. Since each consists of several steps about which an entire book of advice could be written, I will be discussing each part in a separate blog post, plus an extra one to discuss publishing. I will also then write a post relating all of this to the misconceptions found in the comments listed in the image above. These will all be posted at four day intervals.

This post, though, will deal with the preparation element.

This pretty much sums up the preparation stage of writing a book. Next up is The First Draft, which you can find by following the link below!