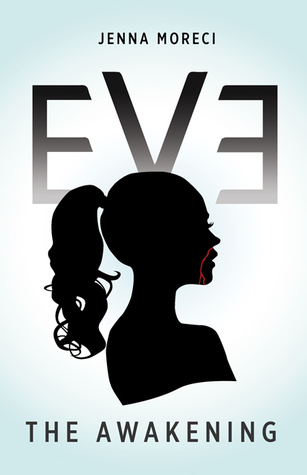 I heard of Eve: The Awakening through YouTube – Jenna Moreci makes (helpful and fun) writing advice videos (you can find her channel here), so I thought I’d give her book a go. Sci-fi isn’t that far from fantasy, but it’s still not my genre of choice.

I found it to be an intense and action-packed read – from just over a third of the way through the book, it is filled with fight scenes, and considering the amount of description that goes into these fight scenes, they’re quite long too. Speaking of long, I think Eve: The Awakening has probably the longest climax I’ve ever read. It’s almost a hundred pages long, and it’s fight scene after fight scene after fight scene. Just as you think things couldn’t get any worse for the characters – they get worse. And I mean like ten times worse. Did I mention that this is an intense book?

Now, that isn’t saying that’s a bad thing. It just isn’t quite my cup of tea.

What was my cup of tea, though, was the romantic subplot. While I found it difficult to get to know the love interest Jason, I liked the way that he and Eve got to know each other and made friends before they got together, which made their feelings for each other believable. It’s a well-written subplot, with no unnecessary conflict, and it has some really cute moments.

Just as with Jason, I found it difficult to get to know the other characters too. They have their defining characteristics (eg, Percy is rich, famous, gay, and likes alcohol and guns), but often there’s little more than that. I’d have liked to have spent more time getting to know the characters, their voices, and their backstories.

Another thing I’d have liked to have gotten to know better is the world they’re in. It doesn’t really feel that much like the future; there aren’t many features to distinguish it from today. The only things different – apart from the chimeras and the Interlopers, of course – are that computers are now foldable touchscreens called scratchpads, and “dynamic” has now changed in much the same way as “wicked” changed to mean “great”, which to be honest I found kind of odd. Personally, I didn’t think these details were enough to give me a true sense of Moreci’s settings.

Unfortunately, my complaints don’t end there. They are all small things, but they add up. For example, I think Moreci spent a little too long describing appearances and clothing when she introduces a character – just long enough to start getting boring. But while this stops when we stop meeting new characters, hearing the words “Eve is the most powerful chimera in the world!” just keeps getting more cliched and annoying throughout the book, no matter how important they are to the story. Like, how do they know she’s THE most powerful chimera on the entire planet? Did they do tests ranking every existing chimera from least to most powerful? Is there a chimera Olympics that Eve conveniently forgot about? Or did they just go on the rumours surrounding her and the fact that she has a backstory tragic enough to be the Chosen One?

Moreci also seems to switch character perspectives between paragraphs, especially during fight scenes, which I found quite jarring, especially as, for the first third of the book, Eve is the only main character so there’s no character-switching. It’s also hard to tell when the perspective has changed; often, it could easily be Eve describing this character’s actions from the outside, until we hear something about their thoughts or emotions that Eve probably couldn’t tell from looking at them.

And now that I’ve got that out of my system, let’s end this review on a good note.

I found Eve’s flashbacks to her childhood rather compelling, especially the one that the book starts with – it really pulled me into the story. There were also a couple of startling plot twists revealed at the end of the book that finally explain what’s going on with the Interlopers, which was both satisfying and interesting.

Overall, I think it was a fascinating and exciting concept, but it didn’t quite meet its full potential. But if you want a book more for its action than its characters or worldbuilding, then this may be the book for you, especially if you want a kick-ass heroine – because Eve is so, so kick-ass.

It also appears that there’s going to be a sequel. Personally, I’m not sure if I’ll be reading it – the characters have been through so much already, I feel like they deserve three lifetimes worth of peaceful retirement rather than another book full of exhausting fight scenes with indestructible Interlopers. However, I hear that Moreci’s next book, The Savior’s Champion, is going to be a fantasy, which sounds more like my sort of thing, so I think I’ll give it a go. After all, I do like Moreci’s writing advice videos, so even though I wasn’t the biggest fan of this book, I definitely think she deserves another chance.

Have you read Eve: The Awakening? If so, what did you think of it? Let me know! 🙂